Lunches for an Outing: Shelburne Museum 6.18.16

It's summer vacation, which means time for our little day adventures (and hopefully some bigger ones, too!) 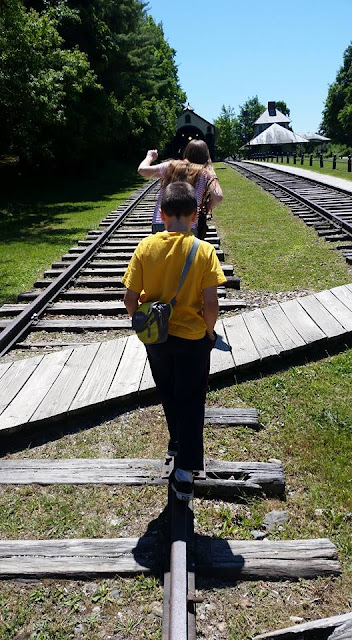 My mom and I brought the kids to one of our favorite places in Vermont, the Shelburne Museum.  This place is AWESOME, and if you are ever in Vermont, I cannot recommend it enough! 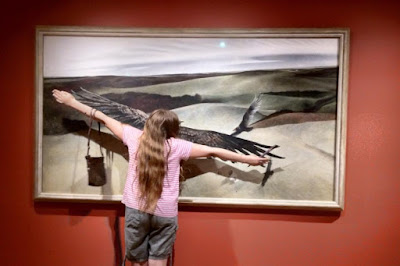 I was really pleased that this time, the kids really were enjoying the art more than they have on previous visits. 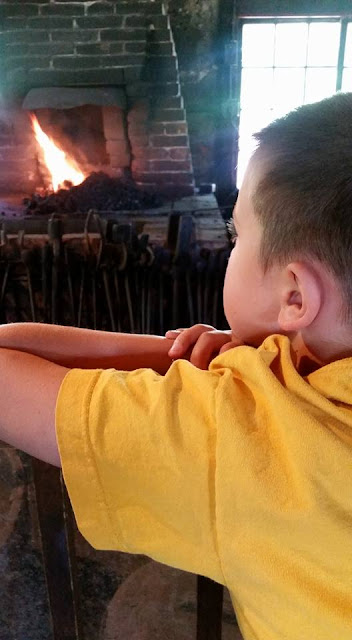 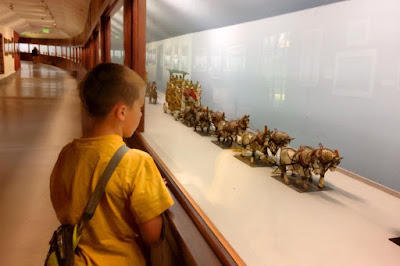 The museum has a lot of history, as well as some really great art. 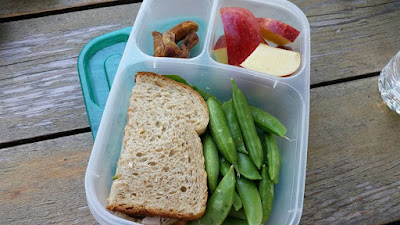 And we brought lunches, of course! 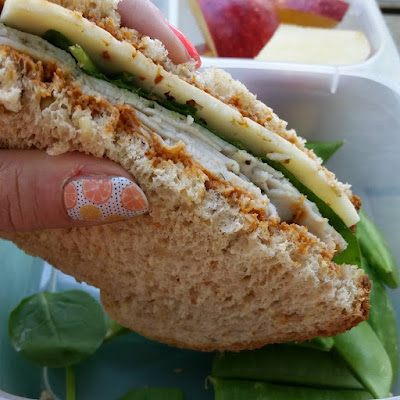 I packed us sandwiches with herbed turkey, spinach, cheese, and muhammara, along with sugar snap peas, apple slices, and dried baby bananas.

The sandwiches were delicious. 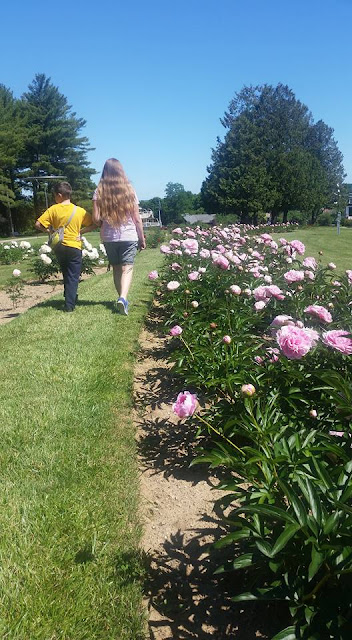 It was a totally glorious day for walking around the museum, and we can't wait to go back again!  It is a really large museum, so it is next to impossible to see everything in one day...

Plus, the kids had been up late the night before at the local races with The Hubby, so maybe they were a little tired... this is after the museum.

This is just the beginning of our summer adventures!  I can't wait to do more!

Today is the last full day of school!  The Girl was sick yesterday, but it feeling much better today.  Being sick the last week of school is no fun!

We had taco Tuesday for dinner last night, so leftovers in lunches!

The Boy has a soft taco, mandarin oranges, apple slices, and watermelon.  His snack is a fruit cup (not pictured, 10g) 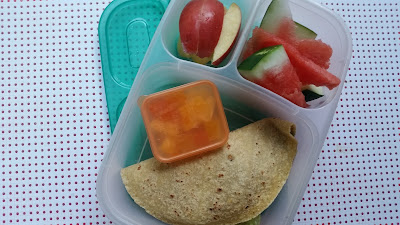 The Girl has a soft taco, fruit cup, apple slices, and watermelon.

Two days left of school, and The Girl woke up with a horrible sore throat and is staying home... I tried to rally her to get up and give it a go, but she wasn't hearing it.  Poor kiddo!

So - The Boy has a class picnic today, and I packed a lunch for him!
He has a sandwich with cheese and ham, along with mandarin oranges, watermelon, and pretzel Goldfish.  His snack is a fruit cup (not pictured, 10g).

It's the final week of school for us!   Not that many more lunches to pack... until we hit our adventures for the summer!

Today, The Boy has watermelon, apple slices, and a sandwich with ham and cheddar.  His snack is mandarin oranges (not pictured, 10g). 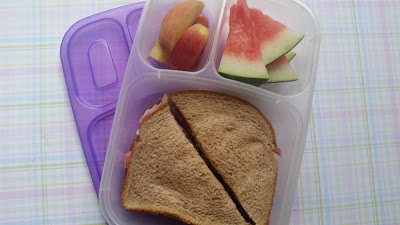 The Girl has watermelon, apple slices, and a sandwich with ham and cheddar.

I'm a little late in blogging this party, but it's worth the wait!

The Boy turned 10 a couple of weeks ago... I cannot believe it!  Crazy crazy crazy.


The kids have been super into Pokemon recently, and I'm not sad about that.  The Hubby and I actually used to record Pokemon every day when we first got married and watch it when we got home from work.  Yeah, this is one we can get behind.

I made a whole bunch of Pokemon themed treats - mostly Pokeballs, because those are the easiest. 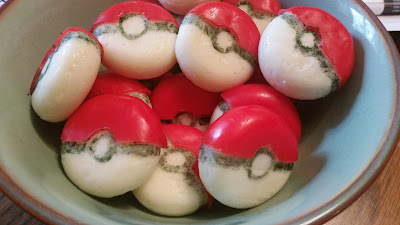 I made Pokeball Babybells - "Poke-Bells" - super simple, just by cutting the wax, and then coloring the black band in with a black food marker. 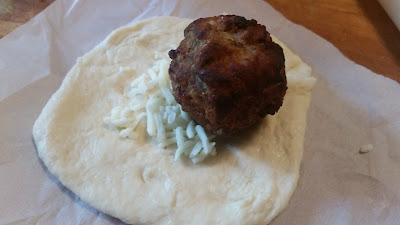 I was pretty proud of these, too - I made meatball and cheese stuffed bread (just used a standard bread dough recipe - you could even buy pre-made pizza dough!  I rolled the dough out thinly, and then stuffed with a pre-cooked meatball and a little cheese. 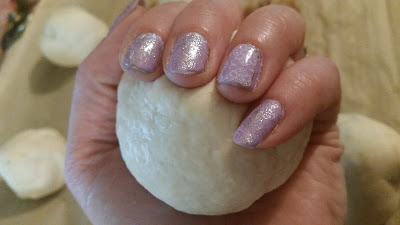 Then, I rolled them up and sealed them tightly. 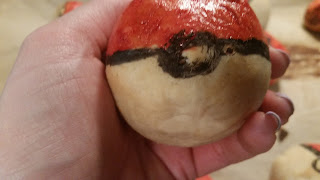 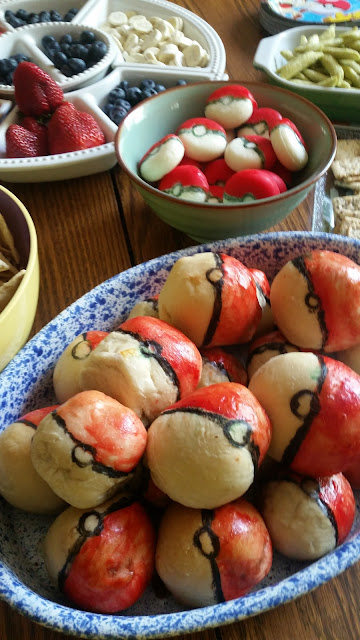 From there, I baked them at 350 F for about 10 minutes, then the magic happened... I used egg wash that I had colored red with a little food coloring and a paint brush to paint half of the balls red.  I did this when they were HALF baked, so they were hot.  Just be careful not to burn yourself!  I used a black food marker to color in the band to finish the Pokeballs!  Then, I baked for an additional 5-8 minutes, or until lightly browned and cooked through. 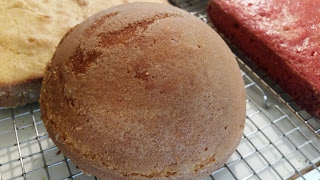 The Boy wanted the cake to be red and white (or, yellow), like a Pokeball.  I started with a yellow cake, using the King Arthur Flour recipe for Back-to-Basics Moist Yellow Cake.  I made half of my ball cake pan with the yellow cake, and used the rest of the batter to make a square cake (in my square springform pan) 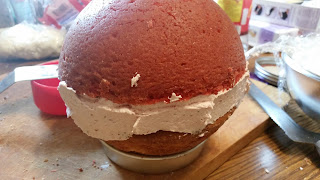 The red half of the cake was made with this strawberry cake recipe.  I did not use their frosting recipe or their filling - I'll get to my recipes in a second.  I made a second half of the ball in strawberry, as well as a sheet cake.

For the frosting, I made a Strawberry Cream Cheese Swiss Meringue Buttercream. 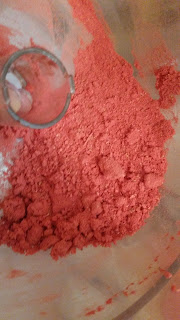 Bring a saucepan of water to simmer.  Fit a mixing bowl or double boiler over the top of the pan.  Combine egg whites and sugar in the bowl and whisk constantly until the mixture is hot to the touch and the sugar is completely dissolved - about 5 minutes.

Transfer the hot egg and sugar mixer to the bowl of a stand mixer.  Whip on high speed until the bowl is no longer warm to the touch, about 10-15 minutes.

Turn the mixer to medium-low and begin adding the butter, one cube at a time, allowing each cube to incorporate completely before adding the next.

After all of the butter has been added, add the vanilla and the freeze-dried strawberry powder and turn the speed back to high. Whip for about 3 minutes or until the buttercream comes together. Turn the speed down to low and add the cream cheese, then mix on medium to fully incorporate.


Now, for the fun part - the Pokemon!  The Boy had a long list of Pokemon he wanted me to make, but I stuck to just a few.


I started with modeling chocolate - I just made white, so that I wouldn't have to make lots of different colors. Then, I painted them all with food coloring. 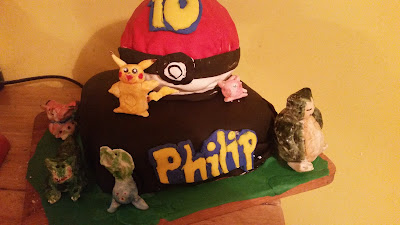 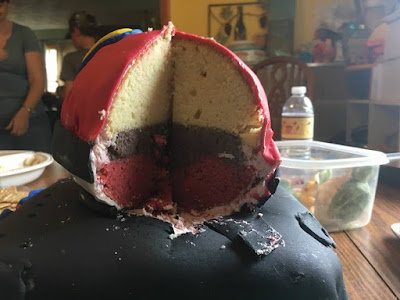 The cake, I covered in store bought fondant.  I didn't want to have to make red and black - they are tricky to get the really saturated colors. 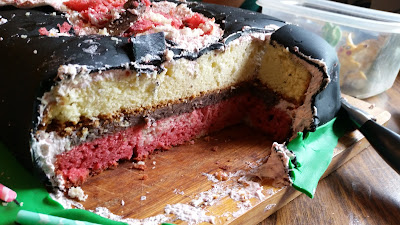 It was pretty delicious.


The filling of the cake was a Cookies & Cream filling. 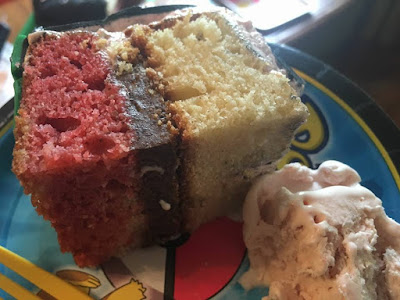 To go with the cake, I made a Strawberry Buttermilk Ice Cream.

Overall, The Boy was pretty pleased with his birthday party, and so was I!

The Boy has a sandwich with turkey and cheese, watermelon, and some strawberries.  His snack is a strawberry applesauce (not pictured, 14g). 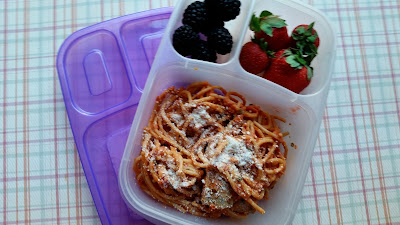 We had pasta for dinner last night, and The Girl asked for leftovers.  So, she has pasta with sausage, strawberries, and blackberries.

Welcome to June!  School gets out on June 9th, so we are in the home stretch!

The Boy has some watermelon, strawberries, pita chips, and sandwich with Muhammara, ham, and cheese.  His snack is a strawberry applesauce (not pictured, 14g). 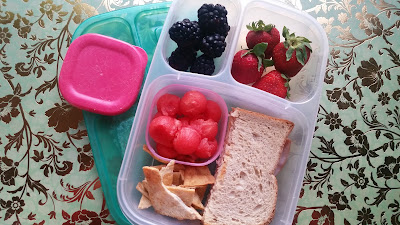 The Girl has strawberries, blackberries, watermelon, a sandwich with Muhammara, ham, and cheese, along with some pita chips.