I have seen this idea before, but had never tried it... rainbow bread.  I've made rainbow cake, and it was met with rave reviews.  I knew a rainbow bread would be a real treat. 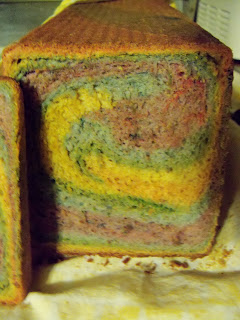 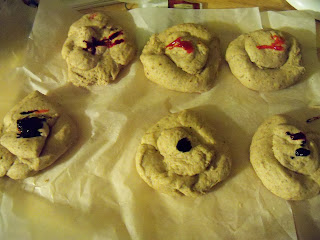 Then, I separated the dough into six more or less equal portions.  I may or may not have measure them to see that they were equal. 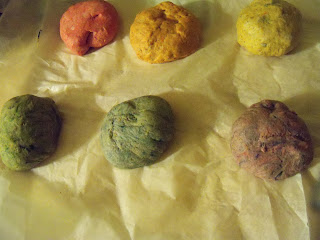 Into each ball of dough, knead food coloring to make a rainbow (I used some gel and some liquid food coloring.  The liquid food coloring actually seemed to work better for this application.  I would still use red gel, if you can get your hands on it, because you don't need as much to get a strong color.  I was running out, so my red is not that great.  Oh, well.  The Girl loves pink). 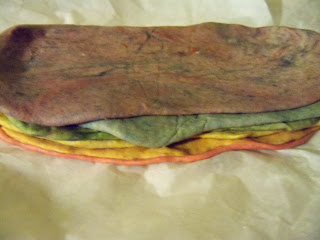 Next, roll each ball into a rectangle about the same size.  They don't have to be very thin, just oblong and about the length of your bread pan. 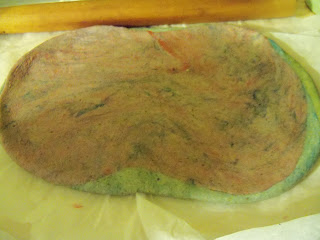 Lay the colors on top of one another in the order of the rainbow, and then roll them together into a thinner rectangle. 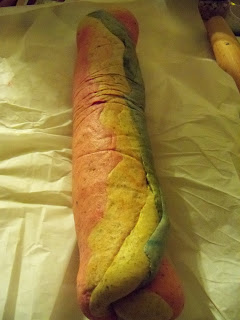 Roll up like a jelly roll, folding in the edges, and transfer to your pan to rise.

Then, I baked according to the directions for the pain de mie.
You could do this with any bread recipe, I just happen to really love the pain de mie.  It's denser crumb makes it perfectly suited to something of this manner, because you are less likely to get unsightly air bubbles and the like.  And, as noted, I just love the texture of it, and so does my family.

A note:  I have not yet tried this bread with natural food dyes, but it is on my list of things to try... you can get great natural food dyes from Chocolate Craft Studio.  She told me that the liquid coloring would probably work best with my rainbow bread.  Let me know if you try it!

Also, check out the Rainbow Connection Link Up over on Bent On Better Lunches!  Follow the rainbow...