I had some leftover pasta dough from last night, and my daughter has been begging me for chicken noodle soup, so I decided to throw one together.

For the noodles, I cut them into linguine, and then chopped them into shorter noodles with a pizza cutter. 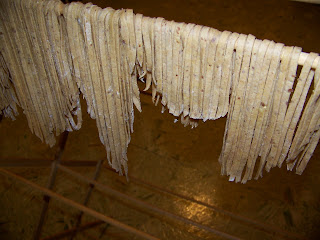 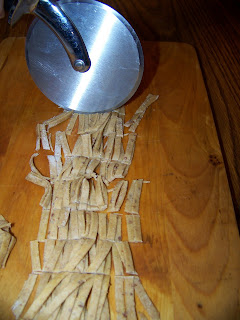 I used my lovely electric pressure cooker and it was done pretty quickly, and had an all day flavor, but you could absolutely do it the old fashioned way on the stove, or even in a crockpot. 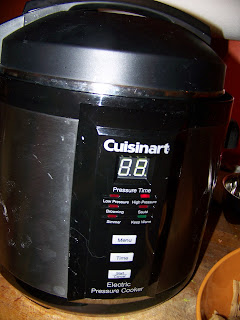 I started with a rotisserie chicken carcass that I had frozen.  I usually have a couple of them in the freezer - we eat what we are going to off the chicken, and I pull off as much meat as I can, and then throw the rest in a bag in the freezer.

I let it thaw in the fridge overnight, and then went on with my recipe.

Remove lid from the pressure cooker and stir in vegetables (except for peas), spices, and chicken pieces. 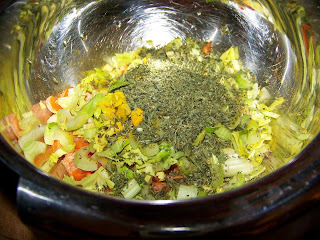 Put cover back on the pressure cooker and cook at high pressure again for 6 minutes. (or, add ingredients to soup pot and let simmer, covered, for another half hour or so, until vegetables and chicken are cooked through).  Let pressure release naturally for 5 minutes again, before switching to quick pressure release.

Remove lid and bring soup to a boil.  My pressure cooker has a "browning" setting which brought it to boiling pretty quickly.  Stir in frozen peas and uncooked noodles.  Boil until noodles are cooked (about 5 minutes for fresh noodles).  Serve and enjoy. 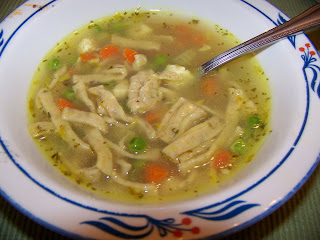